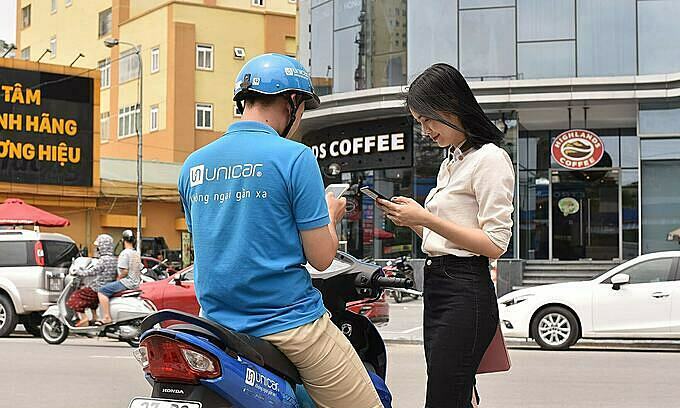 A Unicar driver picking up a passenger in central Vinh Town. Photo courtesy of Unicar.

Local startups Unicar and ZuumViet are preparing to launch ride-hailing apps alongside delivery and other logistics.

Unicar, a start-up based in Vietnam’s central Nghe An province, is currently testing out its services in the province’s capital, Vinh Town.

The company says it plans to expand its services to central towns of Hue and Nha Trang, two major tourist hotspots in Vietnam, in the near future.

ZuumViet, another startup, has been posting driver recruiting advertisements for its ride-hailing app since early December, offering financial incentives such as reduced royalty collection for its first 3,000 drivers.

ZuumViet's services will include ZuumBike (motorbikes), ZuumCar (4-seater and 7-seater cars) and ZuumLux (luxury cars like Audi, BMW), according to the company’s website. The company has yet to publicise a launch date.

The company said it will test out the service in Hanoi this month, before rolling it out to other provinces and localities.

According to latest figures by global market advisory firm ABI Research, Grab led the Vietnamese market in the first half of 2019, accounting for 73 percent of market share in terms of ride-hailing trips. Local app Be held second position, with 16 percent, followed Indonesia’s Go-Viet with 10.3 percent.

Vietnam’s ride-hailing market was the fourth largest in Southeast Asia last year behind Indonesia, Singapore and Thailand, according to a report by Google, Singaporean state-owned holding company Temasek and U.S. management consultancy Bain.

ABI Research estimated the market's worth was $1.1 billion last year and said it could rise to $4 billion by 2025.